Keeping Memorial Day in our Memory - The Chosin Few

You may not be familiar with this story as it is part of what is often referred to as, "The Forgotten War:"

On 27 November 1950, the Chinese 9th Army surprised the US X Corps commanded by Major General Edward Almond at the Chosin Reservoir area (real name Chang Jin). A brutal 17-day battle in freezing weather soon followed. In the period between 27 November and 13 December, 30,000 United Nations troops (later nicknamed "The Chosin Few") under the field command of Major General Oliver P. Smith were encircled and attacked by approximately 120,000 Chinese troops under the command of Song Shi-Lun, who had been ordered by Mao Zedong to destroy the UN forces. The UN forces were nonetheless able to make a fighting withdrawal and broke out of the encirclement while inflicting crippling losses on the Chinese. The evacuation of the X Corps from the port of Hungnam marked the complete withdrawal of UN troops from North Korea. (wikipedia)

The conditions at Chosin were nearly unbearable, with temperatures dropping to nearly -30 degrees below zero (Fahrenheit). At some point a call was put out for "Tootsie Rolls," which was the code name for mortar shells. The only way supplies could be delivered was through an airdrop; upon opening the boxes the soldiers found that actual Tootsie Rolls were dropped. Yes, candy.

Thousands of Tootsie Rolls filled the crates that were dropped. Someone had taken the request for Tootsie Rolls literally, and did not realize that it was mortars that were needed. Instead of despairing, the troops immediately put their entrepreneurial prowess to work to determine how they could leverage what was at their disposal. (inc.com)

Turns out the Tootsie Rolls really did turn out to be "lifesavers," providing much needed calories as food for troops and on-the-fly repair putty for leaks in vehicles caused by extreme cold!

Memorial Day is certainly a celebration of remembrance of our loved ones lost to war.  In addition, I would like dedicate this post to one of the Chosin Few who lived to tell the story, my Great Uncle Bob: 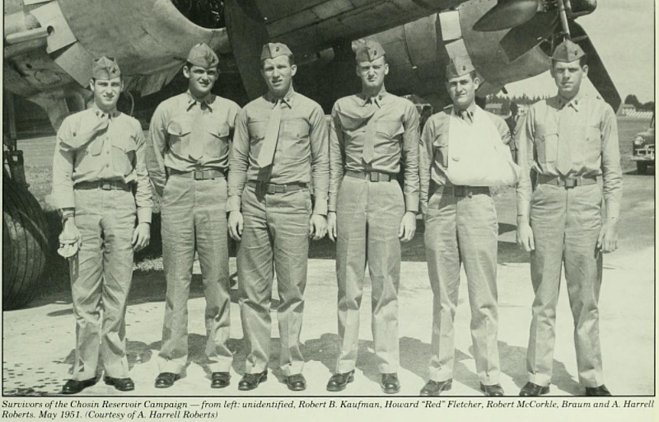 ROBERT BRUCE KAUFMAN, was born June 21, 1931 in Lexington, KY. He was raised and educated in the public schools of St. Petersburg, FL, where he enlisted in the Marine Corps on July 14, 1948.

After “boot camp” at Parris Island, he was sent to the beautiful tropical island of Guam and assigned to Marine barracks above Agana. He left Guam on the second draft in September 1950 and joined Easy Co. 2nd Bn., 5th Marines after the Inchon Invasion. He was wounded November 28 at the Chosin and evacuated from Hagaru, flown to the Naval Hospital at Yokosuka, Japan. After a few weeks Bob was sent to the Naval hospital in Jacksonville, FL, then on to Charleston, SC for evaluation and separation in September 1951.

Bob completed a long career in the Postal Service and retired in 1986. He and his wife, Dolores have spent the time from retirement, camping and fishing the country with three months in Alaska. He and Dolores have three sons, three daughters and three grandsons.

Besides “The Chosin Few” Bob is a Life Member of the VFW and The 1st Marine Division Association.

He is currently residing in Seminole, FL. (source)

Please leave a comment if you would like, remembering one of your loved ones.  We are grateful for their service and celebrate their lives with you this Memorial Day!